The Pilates method is named after its Joseph Pilates the founder of this method. Joseph Hubertus Pilates was born in 1880 near Dusseldorf.  Like many others who went on to excel physically, he was a frail child.  By fourteen he was posing for anatomy charts - and studying them avidly.  Joe was a diver, skier, gymnast, boxer, circus performer and self-defence instructor.  He was working in England when World War I broke out and, along with other German nationals, he was interned on the Isle of Man.  Joe used this forced period of idleness to develop and refine his ideas on health and bodybuilding.  Using springs attached to prison hospital beds amongst many things, he used his methods to rehabilitate the injured and keep the internees fit.  He later boasted that because they followed his regime not a single one of his fellow internees had been laid low by the influenza epidemic that killed thousands in England in 1918.
After the war, Joe returned to Germany and was training the Hamburg police when an invitation to train the new German Army convinced him it was time to move to America.  He sailed in 1926, meeting his wife Clara on the boat on the way.  They were drawn together by a mutual interest in health and the need to keep the body healthy.  They decided to open a physical fitness studio, which they did, located at 939 Eighth Ave, New York.
It had been in Germany in the early twenties that his work first took hold in the world of dance, when he met Rudolph von Laban, originator of Labanotation.  Laban incorporated some of Joe's body building techniques into his own teaching.  It was from Laban that Hanya Holm first learned of Joe's work, which she made part of the regular warm-up in the Holm technique.  In America, Pilates mixed and worked extensively with most major innovators of dance including Ted Shawn, Ruth St Denis, Balanchine, Jerome Robbins, Martha Graham and more.
Joe ran highly popular Matwork classes at the famous dance centre Jacob's Pillow in Massachusetts.  Ted Shawn, one of the founders of Jacob's Pillow said about Joe: "Pilates has never received the recognition commensurate with his greatness."  In 1956 Dance magazine reported, "At some time or other, virtually every dancer in New York, and certainly everyone who has studied at Jacob's Pillow between 1939 and 1951, has meekly submitted to the spirited instruction of Joe Pilates."

By the early 1960's regular attendee at 'Joe's', George Balanchine, invited Pilates to instruct his young ballerinas at the New York City Ballet.  Fellow German immigrant, Carola Trier, found herself at Joe's in 1940 to rehabilitate an injury.  She became a student of Joe's and in the late 1950's he assisted Trier in opening her own studio.
When Joe passed away he left no will and had designated no line of succession for the "Pilates" work to carry on.  Still, his work was to remain.  Clara continued to operate their studio on Eighth Avenue, and direct links to Joe through his students that taught at the studio, are still strong.  Kathy Grant, Mary Bowen, Ron Fletcher, Lolita San Miguel, and Romana Kryzanowska are just a few of the first generation teachers who have devoted their lives to furthering the work of Joe and Clara Pilates.  Dubbed “the elders” by the Pilates Method Alliance, they are joined by Joe’s niece Mary as our greatest contact to the foundation of the Pilates Method.

The last 30 plus years have seen the rest of the world come to realise the great benefits of what the dance world has so long known.  The Pilates Method is now recognised as a leading practice in medicine and rehabilitation, for athletes and sporting bodies, celebrities, performers and the general population.  Joe was right! 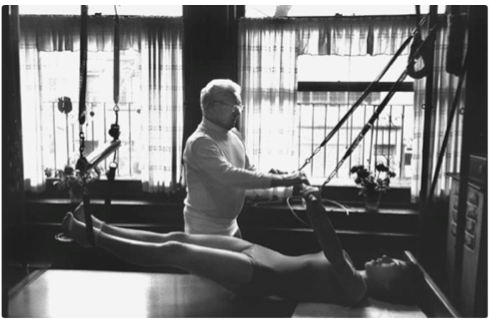